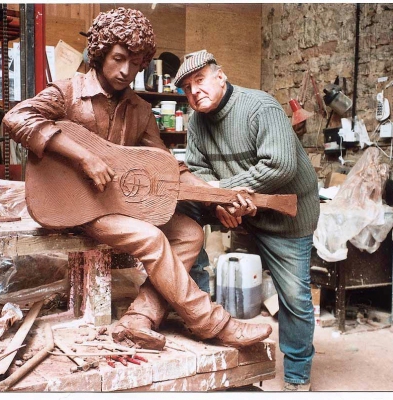 One of Britain’s foremost figurative sculptors, James Butler was well known for both his public commissions, large and small, and his personal compositions. Having gained a thorough grounding in carving early in his career, he then developed equal mastery as a modeller. He created many cherished monuments in Britain and abroad that stand securely in a tradition that can be traced from Donatello through Charles Sargeant Jagger to Giacomo Manzù.

James Butler was born in New Cross, London, on 25 July 1931, the second of three children of Walter Butler, a stevedore, and his wife, Rosina (née Kingman). He enjoyed drawing from an early age, and received encouragement from his parents. In early childhood, he moved with his family to West Malling, in Kent, about six miles west of Maidstone, where his father had built a house.

During the Second World War, his father was conscripted to work on building projects.
However, he sadly died of pneumonia when James was 10 years old, leaving his mother to support the family. She turned the house into a roadside café, called The Haven, and eventually remarried. During that time, she would try to persuade James to show his drawings to the customers, but he was reluctant to do so.

While at West Malling, James attended Maidstone Grammar School. He got on particularly well with one teacher, who was both his art master and the careers adviser. When he reached the age of 16, James told him that he wanted to go to art school, and was encouraged to do so.

James went to Maidstone School of Arts and Crafts, with the intention of becoming a painter. However, the foundation course introduced him to a wide range of artistic techniques and practices, and the opportunity to model clay proved a revelatory experience, soon sparking an obsession with sculpture.

While at Maidstone, James studied sculpture under Sydney Birnie Stewart, known as Jock. When Stewart moved to St Martin’s School of Art, he encouraged James to join him there, and persuaded his mother to fund his further study. In moving back to London, he stayed with an aunt in Camberwell.

At St Martin’s, James studied under Sydney Stewart and the Head of Sculpture, Walter Marsden, and had high regard for both of them. During James’s last term at St Martin’s, Marsden decided that his students had had no practical experience. As a result, he employed the stone carver, Gerald Giudici, to show them how to use a pointing machine to copy a plaster cast into stone. Though Giudici’s demonstration did not go well, he became friendly with James and invited him to become an apprentice carver.

Once he had completed his National Diploma at St Martin’s, James left Giudici temporarily in order to undertake two years of National Service. He served in the Army, working on codes with the Royal Signals, mostly in Germany. When on leave, he stayed with his mother, who had settled in West Norwood, South London.

On completing National Service, James worked again with Giudici as a full-time carver. During this period, he was involved in the carving of many architectural sculptures by William McMillan, Charles Wheeler and James Woodford, including the Queen’s Beasts at Kew Gardens.

At the time that he returned to the employ of Giudici, he followed the advice of colleagues and enrolled in evening classes at the City and Guilds of London Art School. As a former Rome Scholar, his teacher, Bernard Sindall, directed him to the work of the Italian sculptors in the modelling tradition – Giacomo Manzù, Marino Marini and Medardo Rosso – and they would prove to be most influential in his development.

James was awarded the Beckwith Scholarship, and Sindall arranged for him to stay at the British School in Rome for about a month. While there, he was able to look closely at the work of Manzù and Marini, and also at the ancient art that had inspired them, especially that of the Etruscans.

When David McFall took over from Bernard Sindall at the City and Guilds, in 1956, Butler was offered a job teaching there. At first he refused, and took up a scholarship at the Royal College of Art. However, after being at the RCA for some time, he found that he lacked the freedom that he had had at the City and Guilds. So, in 1960, he returned and took up the teaching job. In order to focus on this new position, he also left the employ of Giudici.

Creating the atmosphere of an atelier, in which he and his students worked together in parity, James particularly enjoyed his early years of teaching. At the same time, he established himself as a sculptor, carving a reclining figure for a position outside the City and Guilds, in Cleaver Square, and beginning to exhibit at the Royal Academy. His success was marked, in 1964, by his election as an Associate of the Royal Academy, making him the youngest Academician at the time.

For a while, James lived alongside other artists, at the Abbey Art Centre, Barnet, and Digswell Arts Trust, Welwyn Garden City, Hertfordshire. Then, in 1966, he moved to Greenfield, Bedfordshire, and, for the next 20 years, lived and worked in the Victorian former village schoolhouse.

During the late 1960s and early 1970s, James created stage sculptures for productions at the Royal Shakespeare Company at Stratford-upon-Avon, including Julius Caesar and Coriolanus, and at English National Opera in London. He also produced waxworks for Madame Tussauds, including one of The Beatles for its London premises and others of Rembrandt and his family for Amsterdam, in association with the designer, Timothy O’Brien.

Elected a full Royal Academician in 1972, James began to receive significant international commissions, including one of Jomo Kenyatta, the Kenyan President. The majestic 12 foot seated figure, placed in the centre of Nairobi, proved a turning point in his career. Most immediately, it led to a commission from Zambia for a Monument to Freedom Fighters to stand outside Freedom House, in Lusaka.

In 1975, James gave up teaching at City and Guilds to concentrate full time on sculpture. In the same year, he began a lasting marriage to Angie Berry, who would become a journalist and author. They settled at Valley Farm, Radway, Warwickshire, and there brought up their four daughters, and James’s daughter by a previous marriage.

James was elected a Fellow of the Royal Society of British Sculptors in 1981. Demand for public commissions has continued both in the United Kingdom and abroad, with notable achievements including: King Richard III in the Castle Gardens, Leicester, commissioned by the Richard III Society (1977); the Cippico Fountain, Heriot-Watt University, Edinburgh, commissioned by the Constance Fund and awarded the Otto Beit Medal (1982); Field Marshal Earl Alexander of Tunis, at the Wellington Barracks, London, awarded the Silver Medal of the Royal Society of British Sculptors for the ‘Best Work Exhibited to the Public’ (1985); Sir John Moore, with attendant figures of Rifleman and Bugler, at the Sir John Moore Barracks, Winchester (1986); the Memorial to the Green Howards, a seated figure of a contemplative soldier, at Crépon, near the Normandy Landings (1996); and the Memorial to the Fleet Air Arm, the winged figure of Daedalus, which stands in the Embankment Gardens in London (2000).

In contrast to the towering figures for which he is so well known, James made designs for the Royal Mint: the Royal Seal of the Realm (2001); the 50 pence piece, commemorating Roger Bannister’s 4 minute mile (2004); and the £5 coin to celebrate the 200th anniversary of the Battle of Trafalgar (2005).

Honours included election as a Senior Royal Academician (2006) and the award of an MBE (2009). He was also a Visiting Professor at the Royal Academy Schools.

His recent monumental figurative sculptures include the Rainbow Division Memorial, a pietà placed, on 12 November 2011, at the site of the Battle of Croix Rouge Farm in Picardy, France. On 14 June 2015, his statue of Her Majesty Queen Elizabeth II in full garter robes was unveiled at Runnymede, Surrey, in celebration of the 800th anniversary of Magna Carta.

The Cricketer (A E J Collins)

James Butler in his Studio

Three Children on a Bench

Saskia and Her Bear

Head of a Young Girl

Girl with a Towel